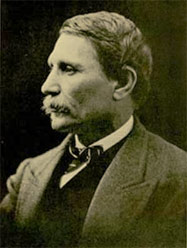 After the Mexican-American War, California and the other new western territories found themselves isolated from the rest of the country. The land between the Mississippi River and the west coast was wild, unexplored, and dangerous. Most of the cross-country roads were very poor which limited emmigration, commerce, and security. In response to a continuing outcry from the residents of the new western states, the United States government organized a Pacific Wagon Road Office under the Department of Interior in 1856.

In 1857, Lieutenant Edward Fitzgerald Beale was assigned the job of building a wagon road across New Mexico and Arizona near the 35th parallel. Beale had had many years’ experience in the west, first with the U.S. Navy in California, then with Kit Carson and John C. Fremont, and later, on government business and explorations in Arizona, New Mexico, Colorado, Nevada, Utah, and California.

Beale’s road roughly followed Lt. Amiel Whipple’s trail west across Arizona through the Flagstaff area and then headed west and a little north through Peach Springs and Truxton Wash (named for Beale’s son), thence through the Kingman area and on to the Colorado River. Working from his ranch at Fort Tejon, California, Beale made several trips across the two states building and improving the road between 1857 and 1860. Perhaps the thing that Beale is most remembered for is the use of camels in his road-building expeditions. The camels were capable of traveling for days without water, carried much heavier loads than mules, and could thrive on forage that mules wouldn’t touch. The camel driver Hadji Ali (known locally as Hi Jolly) worked for Beale and later lived in western Arizona. Ali’s grave in Quartzsite, Arizona is marked by a stone pyramid topped by a copper camel .

The Beale Wagon Road is still visible in many places today and has been well documented in north central Arizona by Jack Beale Smith in a series of booklets called Tales of the Beale Road. Lewis Burt Lesley published one of Beale’s reports in 1929 in the book Uncle Sam’s Camels.