Realistic Map of the Biblical Exodus

This is an analysis of the route of the Israelites during the Exodus, based on a careful study of Bible commentaries, surveyor travelogues in Sinai and the Holy Land, the writings of modern archaeologists, and the experience of the author/cartographer in studying similar migrations across the deserts of the southwestern United States via mule, horse, camel and wagon.

Many different sources were considered to determine the most likely route and campsites of the journey as described in the Bible.

Why another map of the Exodus?

The Biblical account was not written as a detailed historical record but as a story with a spiritual point – but the details of the Bible narrative make sense.

In spite of the minimal detail in the narrative, this map shows real places that fit the account, and are realistically possible travel routes and campsites.

This argues strongly against detractors who believe the Exodus is a myth that never really happened. Although we don’t yet have all the facts, the author believes it really happened – God really delivered His chosen people out of bondage and into the promised land by His mighty power. 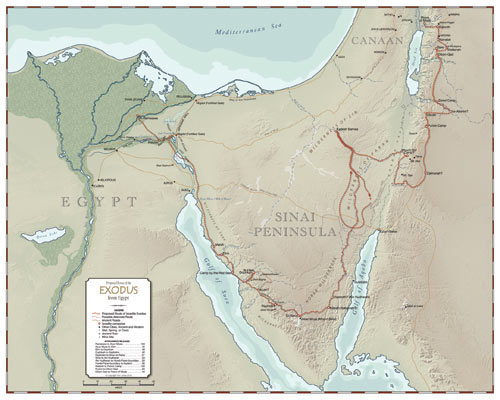 ($7.99) Perfect for the classroom, or for home display, we’ve made our one-of-a-kind map of the Exodus available for purchase. The high-resolution digital map file is accompanied by a free descriptive document to help Bible teachers and students understand the real geography of the event.