In 1851 Lorenzo Sitgreaves was told by his guide, Antoine Leroux, that there was a stream called the “Bill Williams Fork” which flows from west of Bill Williams mountain all the way to the Colorado River. Lt. Whipple hoped this stream would provide an easy railroad grade to the river. The Williams Fork turned out to be many miles west of where Sitgreaves expected it. They finally reached the fork (the Big Sandy River) through Cactus Pass, near where Interstate 40 now slices through the mountains on its way toward Kingman. Cactus Pass was later used by the Prescott to Mojave Toll Road which is still visible from the highway. 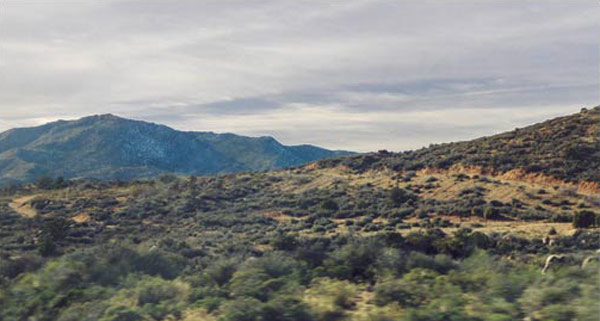 Whipple on the Big Sandy:

February 1 [1854]. –It was with much difficulty that the train made its way through Cactus Pass, notwithstanding the wagon loads were lightened. But from the foot of the ridge we travelled rapidly, passed the Yampais springs, and encamped on White Cliff Creek [probably Knight Creek] where we left it a few days since, eight miles from the pass…Moving southwest along the dry bed of the creek to its junction with a large sandy arroyo, supposed to be what Walker named “Big Sandy,” we then travelled south, through the centre of a wide valley, and, after a march of six miles, encamped without having found water.

Whipple’s survey expedition followed the Big Sandy and the Bill Williams River to the Colorado River.