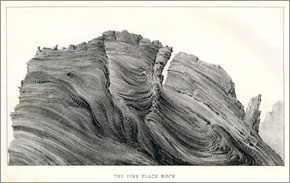 This picture has held a certain fascination for me since I first saw it in W. H. Emory’s Notes of a Military Reconnoissance. Where is this place? How big is it? What does it really look like? It was on the short list of sites I had to find and photograph. So, after locating the expedition’s November 8, 1846 campsite near the Spires (on a December 2000 trip with my father and brothers), we hiked west along the tracks of the Copper Basin Railroad to find Fire Place Rock. Emory describes this area in detail but it takes a little investigation to figure out which of the many cliffs in the area is Fire Place Rock. I’ll attempt to lay out our investigations and reasoning here in a logical and clear manner.

Here is Emory’s complete journal entry for the area we’re examining:
“November 9. [1846] …We started in advance of the command to explore the lower belt of mountains by which we were encompassed. The first thing we noticed in the gorge was a promontory of pitch-stone, against which the river impinged with a fearful force, for it was now descending at a rapid rate. Mounting to the top of the rock, on a beautiful table, we found sunk six or eight perfectly symmetrical and well-turned holes, about ten inches deep and six or eight wide at the top; near one, in a remote place, was a pitch-stone well turned and fashioned like a pestle. These could be nothing else than the corn-mills of long extinct races. Above this bed of pitch-stone, a butte [North Butte] of calcareous sandstone shot up to a great height, in the seams of which were imbedded beautiful crystals of quartz. Turning the sharp angle of the promontory, we discovered a high perpendicular cliff of calcareous spar and baked argillaceous rock, against which the river also butted, seamed so as to represent distinctly the flames of a volcano. On the side of the river opposite the igneous rocks, the butte [South Butte] rose in perpendicular and confused masses.”

Here’s an aerial photo of the area with each cliff numbered: 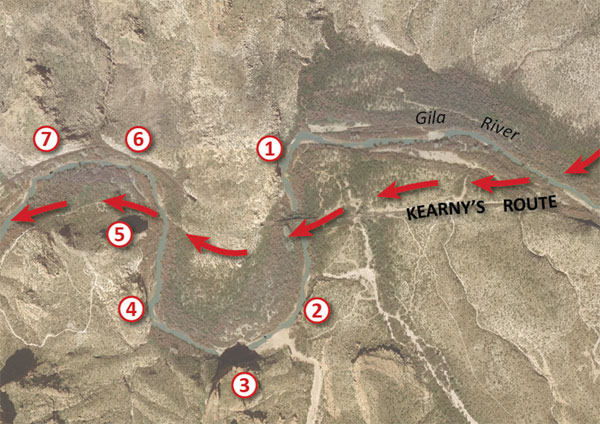 Google aerial imagery of the horseshoe bend in the Gila River east of Florence, AZ. The cliffs that were examined as possible locations of Fire Place Rock are numbered 1-7.

Seven possible cliffs within a mile. Emory’s “promontory of pitch-stone” [glassy rhyolite] is the dike that the river horseshoe flows around. He mentions the “fireplace” after passing the promontory, so cliffs 1-3 are disqualified. I visited this area twice to see if any of these cliffs match the picture. The only possible fit for the shape of the rock was number 7 but it lacked the swirls and dramatic coloring of the description.

A little research provided an answer. There is a railroad track built at the base of these cliffs with a tunnel through the promontory. This line serves the copper mine at Mineral Creek. David Myrick’s Railroads of Arizona has a section on the building of this rail line and its tunnel. He mentions that the face of the cliffs had to be blasted away on the western approach to the tunnel. The dramatic face of Fireplace Rock now makes up the rubble in the railroad bed at its base.