After leaving camp the morning of November 9, 1846, Emory and the advance party started down the Gila River to break the trail. They surmounted the tip of a small peninsula jutting out from North Butte, which causes the river to form a horseshoe. West of this peninsula they found a striking feature they named “Fire Place Rock.” 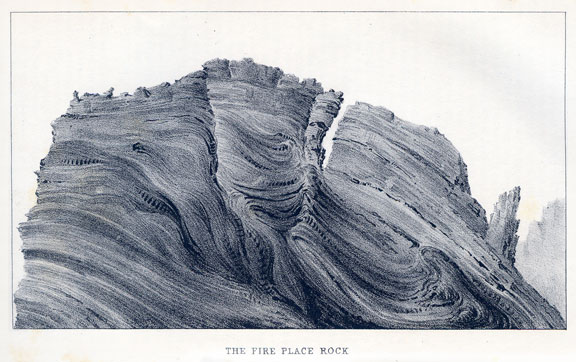 Here is the lithograph from Emory’s report.

“Turning the sharp angle of the promontory, we discovered a high perpendicular cliff of calcareous spar and baked argillaceous rock, against which the river also butted, seamed so as to represent distinctly the flames of a volcano.”

This lithograph has fascinated me for several years but the rock has been rather difficult to rediscover. After exploring the area thoroughly, however, I believe that we have found the rock depicted in the report. Here is a photo:

The current state of Emory’s Fireplace Rock. The Gila River is in the trees at its base. Tom Jonas photo.

For a description of our investigations in the area while searching for this rock, and an explanation of why it looks so different from the picture in the report, see the “Finding Fire Place Rock” page on this website.