While Commissioner Bartlett was off seeking adventure and supplies in Mexico, the surveying and mapping parties, led by Lt. Amiel Whipple and A.B. Gray, began the Arizona section of the survey on the Gila river near where the town of Safford is located today. From there they surveyed downstream to the mouth of the San Carlos River, which was then called the San Francisco, and continued into the canyon which began a few miles downstream. About 4 miles below the future site of Coolidge dam they reached a wider area along the river and camped. Lt. Whipple sketched the area in his diary. 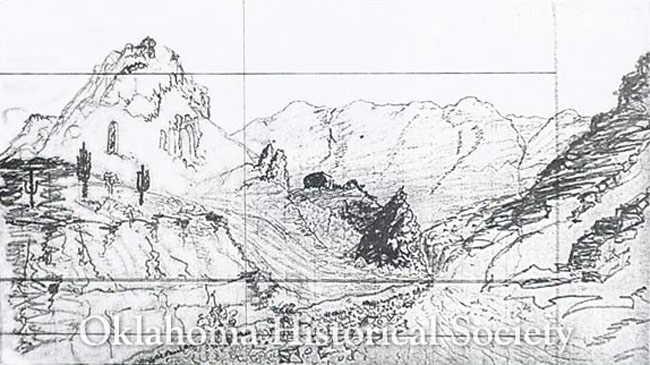 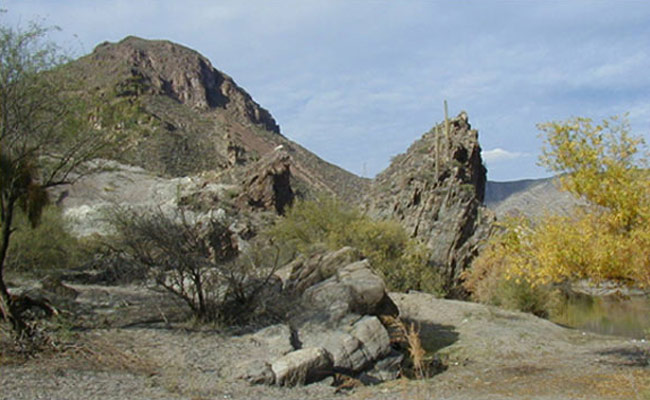 Here’s a portion of Whipple’s diary entry from a typescript by Dr. David H. Miller:

Saturday Oct. 25 [1851] “…Left camp “desertion” where Indians without cause have left us we entered the canyon. Perpendicular bluffs 4 or 5 hundred feet high hemmed us in on both sides. But by threading the stream, crossing and recrossing probably a hundred times through quick sands and bogs & over precipices and barrancas, we proceeded about 8 miles where we encamped on good grass…Rock of red feldspar predominates. A mountain of magnetic iron ore was passed today…The banks were covered with a conglomeration of trap porphiry [sic], pudding stone, sand, and boulders often approaching granite. The rocks are of plutonic and metamorphic origin. The following is a sketch from camp.”