Ruins on the Salinas 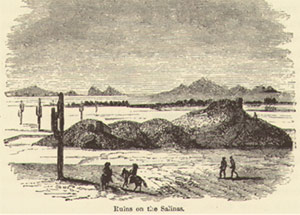 The local Indians had described a ruined pueblo to Commissioner Bartlett and he undertook a 3-day excursion to examine it. Early on the morning of July 3, 1852, the men rode north from Maricopa Wells, then followed the Salt River upstream along the north side of modern Phoenix’s “South Mountain.” The next day, a few miles east of Tempe Butte they arrived at this ruined building near the edge of the elevated terrace where the city of Mesa was later built. A woodcut of the ruin (left) was published in Bartlett’s Personal Narrative. 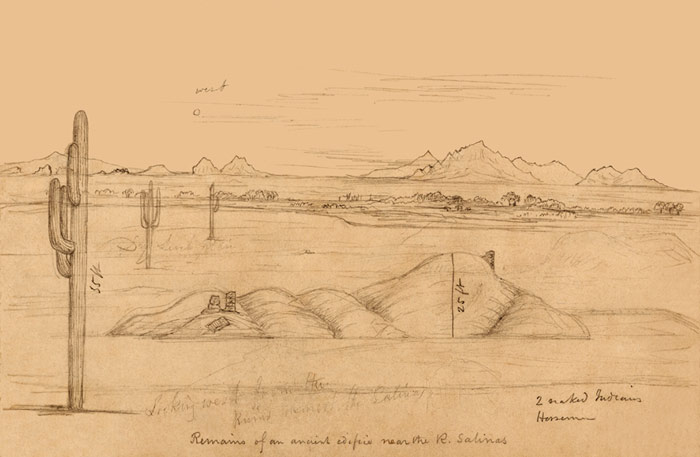 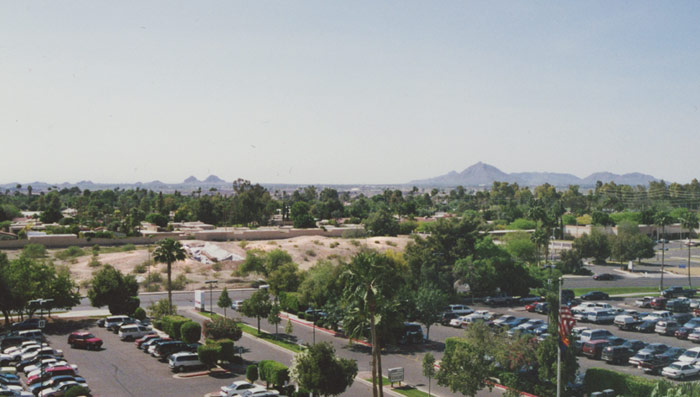 The Mesa Grande Ruin in Mesa. The Salt River course is blocked by foreground trees but the same mountains are visible in the distance. Tom Jonas photo.

(July 4, 1852) …A ride of a mile brought us to the table-land, when we made for a large mound or heap which arose from the plain. In crossing the bottom we passed many irrigating canals; and along the base of the plateau was one from twenty to twenty-five feet wide, and from four to five feet deep, formed by cutting down the bank—a very easy mode of construction, and which produced a canal much more substantial than if carried across the bottom…On reaching the great pile, I found it to be the remains of an adobe edifice from two hundred to two hundred and twenty-five feet in length, by from sixty to eighty feet wide, its sides facing the cardinal points. Portions of the wall were visible in only two places, one near the summit, at the south end, where, from the height of the pile, it must have originally been three or four stories high; and the other at the northern extremity, on the western side…From the summit of the principle heap, which is elevated from twenty to twenty-five feet above the plain, there may be seen in all directions similar heaps; and about a mile to the east, I noticed a long range of them running north and south, which the Indians said were of similar character to that on which we stood.