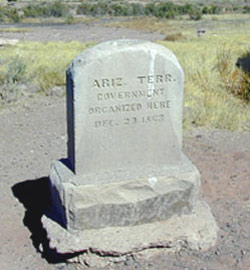 This was a major watering place only about 30 miles from the New Mexico border and about 6 miles past Jacob’s Well. It was the site of the official swearing in of the initial territorial government officials of Arizona in December of 1863. Beale’s party camped there in September of 1857. Here are comments from other travelers:

“Leaving Jacob’s well, we proceeded about 5 degrees north of west, 8 miles to Navajo spring, a fine pool of water which breaks out at the surface of a valley”. — A.W. Whipple, 1853

“From this remarkable lake, or pond [Jacob’s Well], we passed on in a more northerly direction, and had scarcely gone six miles before we came to the fresh spring [Navajo Springs] that had been mentioned, and immediately made preparations for resting and passing the night there. The water was gushing out of the ground in several places, but instead of the various runnels uniting into a brook, they overflowed the nearest low ground and transferred into a marsh, in the small pools of which, however, we found abundance of excellent water for ourselves and our cattle.” –Balduin Mollhausen, 1853

“We think we crossed the Arizona line today [December 28, 1863], but it is difficult to ascertain with certainty… At daybreak [the following day] we made a short march to this point [Navajo Springs], where there is abundant water, in springs right on the surface, and good grass. We have to bring wood, however, several miles. It is very rare in this country that all the requisites of a good camp come together. From this point we shall send back a military express, and if it escapes the Indians it will reach you.” –Judge Joseph Pratt Allyn, member of Arizona Territorial Government Party, December 29, 1863 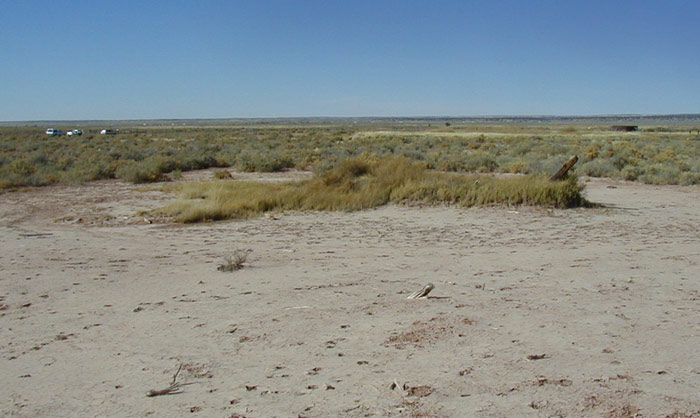 Navajo Springs consists of many scattered seeps where the water has caused small grass mounds to grow. In the dry season the ground sounds hollow in places. In wet times we are told there is quicksand there. Tom Jonas photo. 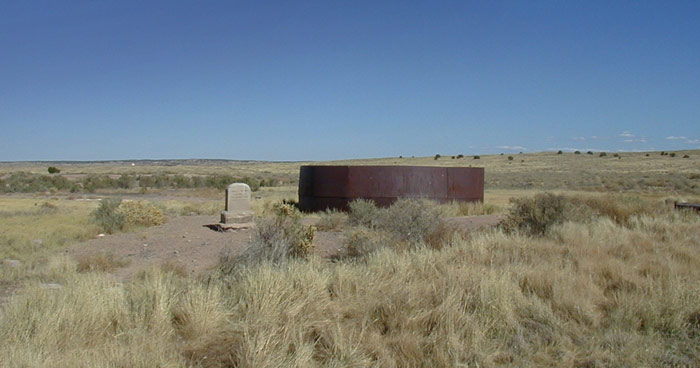 A storage tank now collects water from the springs for the use of local Navajo ranchers and sheep herders. Tom Jonas photo.

The water seeps out of the ground in various places over a wide area. In the dry season the ground sounds hollow under your feet and in wet seasons I’m told there is quicksand here. The springs are located about 3.25 miles southeast of the Navajo exit of Interstate 40 in eastern Arizona.