Whipple’s party crossed the path of today’s Interstate 40 somewhere around Pinta and entered what is now the Petrified Forest National Park north of the highway. They more or less paralleled the highway for 15-20 miles and crossed back to the south side of the highway near where it crosses Lithodendron Wash. Camp 76 was probably west of Pinta in Dead Wash before they entered the limits of today’s National Park. 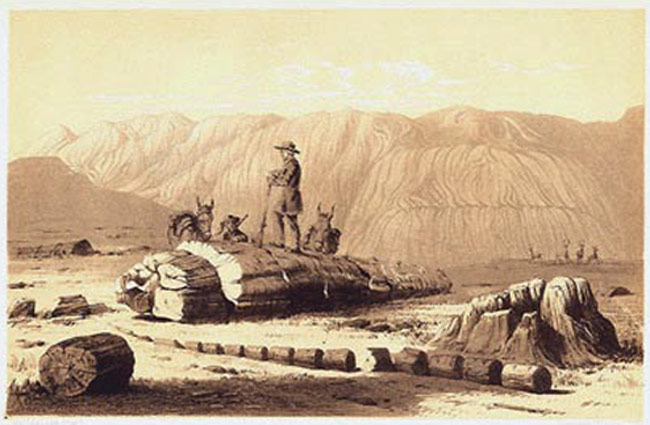 Mollhausen’s chromolithograph of the petrified Forest

Here’s some of what Whipple had to say:

December 2–Camp 76…Quite a forest of petrified trees was discovered to-day, prostrate and partly buried in deposits of red marl. They are converted into beautiful specimens of variegated jasper. One trunk was measured ten feet in diameter, and more than one hundred feet in length. Some of the stumps appear as if they had been charred by fire before being converted to stone. The main portions of the trees have dark brown color; the smaller branches are of a reddish hue. Fragments are strewn over the surface for miles.