After emerging from a 40-mile detour through the mountains to get around an impassable canyon, Kearny’s soldiers made it back to the Gila River near the modern mining community of Christmas, AZ. The Indian trail they were following  when the march resumed turned suddenly into a side canyon (Ash Creek) after six miles and then cut across to the San Pedro River. The precise path they followed up Ash Creek and then over to the San Pedro is difficult to determine with certainty but the illustration of Saddle-Back mountain in the official report gives some hints. Their camp on the San Pedro River was about 1.5 miles south of modern Winkelman, AZ.

View of the valley of the San Pedro River from the dividing ridge west of Ash Creek. The highest mountain, right of center, is Mount Lemmon, near Tucson, which Kit Carson pointed out to Capt. Turner from this area. Tom Jonas photo.

Here’s an excerpt from the journal of Henry Smith Turner:

“November 5, Thursday [1846]. – Started an hour later than usual, the Howitzers being still behind, expected to make a short day’s march, and wait if necessary for them. Descended the Gila for 6 miles, then taking up a dry, sandy ravine [Ash Creek], march about 10 miles, bearing at first due south and then towards the west – reach the Rio St. Pedro a mile or two above its junction with the Gila, and encamped at the base of the hills on the west side, having marched in all about 16 miles over an exceedingly rough road. Saw orchards of the tomb-stone cactus, more than on any previous day, and partridges [Quail] in their usual abundance. The St. Pedro is a small stream, clear water, and with the usual growth on its valley as found near all the streams in this section of the country – the valley of this stream is quite wide and covered densely with weed and scrubery [sic]… Our guide [Kit Carson] has pointed out to us a peak near which is the Mexican Garrison of Touson [sic].” 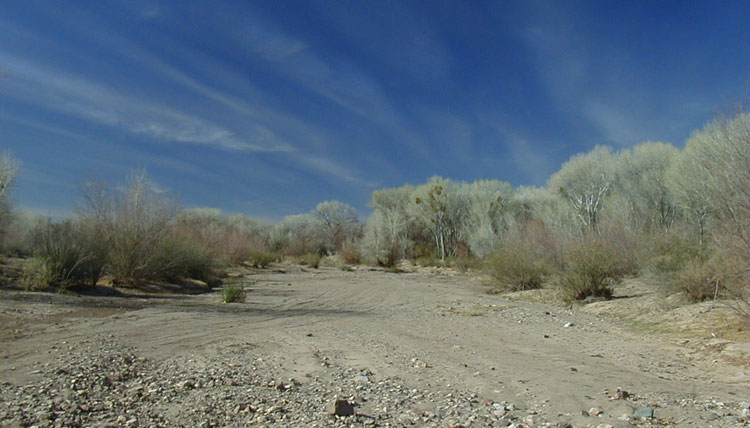 Vicinity of Kearny’s camp of November 5 & 6, 1846, on the San Pedro River, a little over a mile above the point where it empties into the Gila River at Winkelman, AZ. Tom Jonas photo.