Topographical Hill is not on any map. Even Lieutenant A. W. Whipple, who named the hill in 1854, did not identify it on his map but he did mention it in his report. Whipple was on a reconnaissance ahead of the main body of his railroad exploration expedition. He was looking for the Bill Williams Fork, a river which Lorenzo Sitgreaves’ 1851 map showed as beginning at the southern edge of Bill Williams Mountain and flowing southwest to the Colorado River. Whipple was hoping to find an easy grade for the proposed railroad along this river. His guide, Antoine Leroux, had also been Sitgreaves’ guide 3 years earlier. Leroux brought Whipple along the western flank of the mountain to the edge of the “Bill Williams Fork” (actually Hell Canyon), which flows southwest at that point. Whipple then needed to find a good viewpoint so he headed west along the edge of the canyon and camped near some high hills where he could see the course of the creek. West of this campsite is Whipple’s Topographical Hill. He climbed this hill in the morning and after recording the view to the west he rode down off of the Colorado Plateau toward Ash Fork. To his disappointment he discovered from these hills that the creek he was on did not flow southwest to the Colorado but turned south to join the Verde River. Here are Whipple’s words, beginning on January 2, 1854:

“We followed Leroux in search of the main stream, to a point which he recognized as being near Capt. Sitgreaves’ Camp No. 21. Here we saw the ravine in which the creek flowed south, and followed a branch about four miles to a point of hills, where we again encamped. The stream below us flows in a canyon 150 feet deep. Ascending a hill half a mile south, we saw an immense and beautiful valley into which the creek enters from the mouth of the canyon, about four miles distant.”

[January 3] “…A mile west from our bivouac no. 4, we ascended a ridge called Topographical Hill, where we had a view still more extensive than that noted yesterday. We can now trace the great valley, as well as the western ridge of mountains which bounds it, far towards the north-northwest.”

The location of the hill has been determined by Harley G. Shaw and mentioned in his article “Wood Plenty, Grass Good, Water None.”* Shaw has determined that their campsite was near Nagiller Tank. 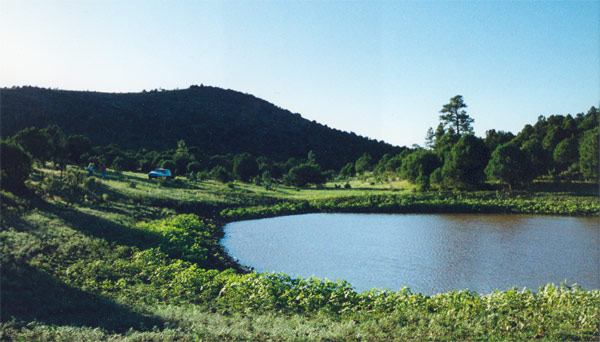 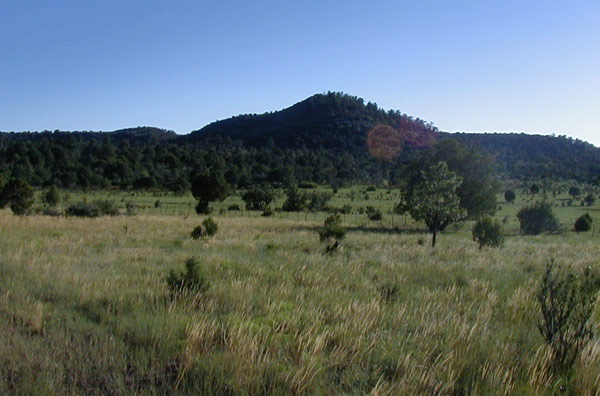 Although Topographical Hill is not labeled on Whipple’s map we have plenty of evidence in the diaries of Lieutenants Whipple and Tidball to lead us to it. Here are the key points we can use to identify it:

1. Whipple describes the route to their camp on January 2:

“We then followed Leroux in search of the main stream, to a point which he recognized as being near Capt. Sitgreaves’ Camp No. 21. Here we saw the ravine [Hell Canyon] in which the creek flowed south, and followed a branch [Devil Dog Canyon] about four miles to a point of hills, where we again encamped.”

They must have reached Hell Canyon near where the Bill Williams Loop Road now crosses because at this point the canyon turns southwest. If they had reached it much farther upstream the creek would be flowing magnetic west. Four miles west on a sinuous trail along the edge of Hell and Devil Dog Canyons would bring them near Nagiller Tank.

2. At this point Whipple will be looking for a good observation point to see if this creek will take him west or southwest to the Colorado River. I first assumed that he would have traveled to the west edge of the plateau via the open prairie (north half of section 29, T21N, R1E). This would have brought him to Nagiller tank from the north or more likely to a different campsite a mile or so north of Nagiller. To investigate this possible alternate campsite we climbed the 6671 ft. peak about a mile north of Topographical Hill and above Flat Mesa and found an extensive view to the west but no view of the course and mouth of Hell Canyon to the south. The campsite to the north, and its corresponding hills therefore, do not fit Whipple’s description.

I now believe that Whipple stayed right at the edge of, or even in the canyons on his four-mile jaunt to the west, approaching the neighborhood of Nagiller tank from the south. The tank appears to be spring-fed but, strangely, neither of the diarists mentions a spring at this bivouac. Judging from the distances given to the hills south and west, they may have camped a short distance below the tank. The proposed Topographical Hill west of Nagiller tank is more or less at the southwest corner of this part of the Colorado Plateau or Mogollon Rim and thus makes a natural place for a view of the country to the west and south. Whipple states:

“Ascending a hill half a mile south, we saw an immense and beautiful valley, into which the creek enters from the mouth of the canyon, about four miles distant.”

This hill to the south fits the 6775 ft. southeastern extremity of the proposed Topographical Hill, which is about ¼ mile south on the map but closer to ½ mile in climbing distance. From here Whipple could see the course of Hell and Devil Dog Canyons, and all the country to the south and southwest.

3. Whipple writes the next morning (January 3):

“A mile west from our bivouac No. 4, we ascended a ridge called Topographical hill, where we had a view still more extensive than that noted yesterday.”

The base of the ridge of Topographical Hill is a little over one half mile west of a their bivouac, assuming the camp was below Nagiller Tank. Climbing to the north or south summit, however, would probably require closer to a mile of travel.

4. Lieutenant Tidball’s diary entry on January 3 reveals that they were camped on a ravine with a north-south orientation:

“First ascended for a mile up the westerly base of the ravine upon which we encamped to the top of a high hill or mountain from which we could see the whole country round for 50 mi.”

The Nagiller ravine is the only north-south ravine in this area that is adjacent to hills that fit the descriptions of Whipple and Tidball.

5. Beale’s and Whipple’s maps show the party cutting across the southern edge of a feature which may be Flat Mesa. This would require that they descended from the plateau near the north end of Topographical Hill. Comparing the two maps below, however, it occurred to me that the feature that I labeled “Flat Mesa” on the Beale map actually fits the position of Topographical Hill better. Since Whipple’s diary does not mention Flat Mesa it seems more likely that Beale (who had probably not personally visited the spot) would depict Topographical Hill on his map. If Beale’s map shows Topographical Hill and Whipple’s map shows Flat Mesa (with a black dot on the trail about where Topo Hill would be), then the two maps agree nicely with each other and with the route Whipple described.

The party likely climbed the ridge to the saddle area due west of their camp and then climbed either the 6888 ft. north summit or the 6823 ft. south summit of the ridge for a better view. After carefully observing the sweeping view before them they picked their way down the west flank of the mountain toward Ash Fork. 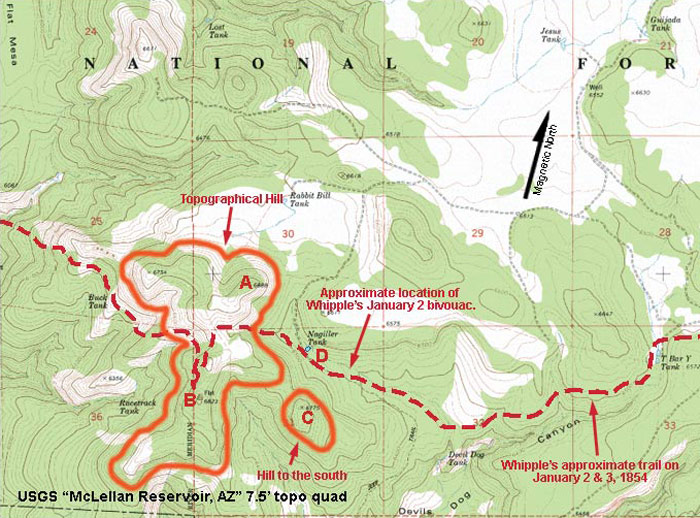