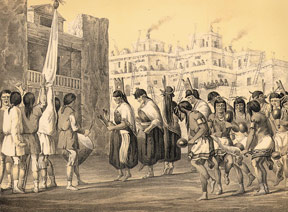 After the conquest of New Mexico and California it was apparent that transportation and communications needed to be improved between these new territories and the rest of the United States east of the Mississippi. Geographical knowledge of most of this area, particularly northwestern New Mexico (now northern Arizona), was very limited and inaccurate. Some maps of the day showed a river system that might provide a possible navigable water corridor between New Mexico and the Gulf of California via the Zuni, Little Colorado, and Colorado Rivers. An expedition was organized to investigate the potential shortcut to California.

In September of 1851 Captain Lorenzo Sitgreaves, along with a small crew of topographers, naturalists, artists, and support personnel, and an escort of 30 infantrymen left the Zuni Pueblo in western New Mexico by pack train with instructions to explore and map the Zuni and Colorado Rivers and evaluate their navigability.

They traveled southwest along the Zuni River to its mouth and then headed northwest along the Little Colorado, intending to follow it to the Colorado. When they reached Grand Falls (northwest of present-day Winslow, Arizona) their guide, Antoine Leroux, advised them that it was unwise to follow the river any further because it flowed in a deep canyon for the rest of its course and emptied into the great canyon of the Colorado River. 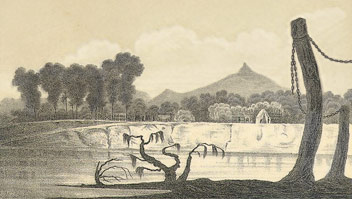 They left the river and struck off due west around the north side of the San Francisco Mountains, discovering the Wupatki Indian Ruins along the way, and looped southwestward around the south side of Bill Williams Mountain. The rest of their westward march followed near the future alignment of Route 66 to the Colorado River near the modern town of Bullhead City, Arizona. After a difficult march south along the Colorado River they reached Camp Yuma on November 30.  Of course, Sitgreaves discovered that the Zuni and Little Colorado Rivers were not at all navigable and would be useless to transport troops and supplies.  The Colorado River, however, was found to be navigable along the entire distance that he explored.  Sitgreaves’ official report, “Report of an Expedition Down the Zuni and Colorado Rivers in 1851,” was published in 1853.